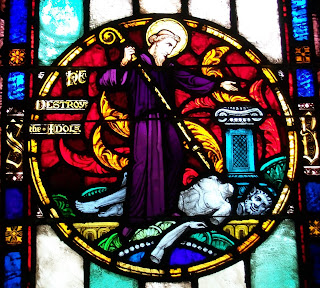 At Monte Cassino Benedict founded his new monastery, but not without difficulties.  There at Monte Cassino, was a temple to Apollo at which some people still worshiped as did their ancestors.  Benedict destroyed the temple and cut down their sacred groves.  In place of this, he erected a chapel that he dedicated to St. Martin and at the spot where the altar of Apollo stood, he constructed a chapel in honor of St. John the Baptist.  Gradually he won over the people of that area over to the worship of the true God. 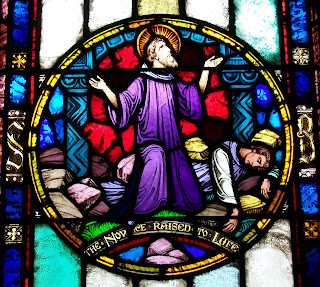 Miracles attributed to Benedict at Monte Cassino include:  the restoring of life and health to a young monk who had been crushed by a falling wall, knowledge of things that happened when individuals were not in his presence, driving out of an evil spirit, the ability to foresee the future, and restoring life to a man’s son.
Posted by Benedictine Nuns at 9:00 AM

Email ThisBlogThis!Share to TwitterShare to FacebookShare to Pinterest
Labels: Life of St. Benedict