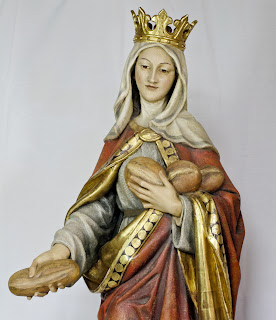 Saint Emma, the patroness of our monastery, was the daughter of a Bavarian count and born around 808.  Growing up, she received a good, deeply Christian education.

She married Ludwig “the German”, grandson of Charlemagne, to whom she had seven children.   One daughter died quite young and the remaining three daughters became Benedictines.

The three sons succeeded each other in ruling in their father’s stead.  All her children died before the age of 30.

Emma herself suffered a stroke in 874 from which she never recovered.  She died January 31, 876 and was buried in the Basilica of St. Emmeran in Regensburg, Germany.

Her feast day is January 31.
Posted by Benedictine Nuns at 9:00 AM