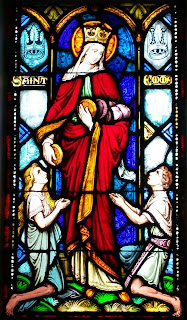 If one truly wishes to understand the life and work of Blessed Emma of Regensburg, one must enter into the political world of that time period. Charlemagne who died in in the year 814 had a worthy successor in Ludwig the Pious (814-840), even though the latter lacked the hands-on decisiveness that Charlemagne had possessed.

Ludwig the Pious had a magnificent, deeply Christian view of the "Christian Empire" which would be located in the heart of . In order to secure this goal, he divided the empire amongst his three sons in the year 817. His son Ludwig, who would later be called "The German", received the eastern part of the empire with in its center.

And that same Ludwig married Emma, the daughter of a Bavarian Count. She had been born around 808 and had received a good, deeply Christian education. Both partners in this marriage (which occurred in 827) were very well suited for each other, even at an interior level. It was a very harmonious relationship. God gave them seven children. Unfortunately one child, Gisla, died when still quite young.

Our history books praise Emma's generosity. She was a great benefactress to the poor and the patroness of the Obermuenster female religious foundation which she headed. Most of her life was spent in and it was greatly focused upon providing the children with a solid Christian education.

However, politics of the bigger world entered herein as well. Ludwig became involved in disputes over matters of inheritance and Emma also felt the effects. Not even the fate of the children was left untouched by politics: in order not to be tied down politically, their father gave all of his daughters into monasteries.

The children enjoyed their education in , the favorite residence of their royal parents. The greater part of this education occurred at the Obermuenster foundation which, as religious foundation for noblewomen, also bore the task of educating the daughters of the nobles within the kingdom.

Emma, the queen of deeply-rooted faith, had much suffering to bear in her life: All her children died before they reached the age of thirty! She herself suffered a stroke in 874 from which she never recovered. On January 31, 876 she died in , devoted to God and ready to meet Him. Her grave to this day (according to monastery tradition) is located inside St. Emmeran Church in . Her tomb bears a beautiful and graceful facial image and is one of the most beautiful sculptures of the Thirteenth Century.

January 31 is the feast day of Blessed Emma of Regensburg.

Lord, Our God,
You alone are holy,
and no one is good without Your help.
Grant that,
through the intercession of Blessed Emma,
we may model our life according to Your will
and attain that level of holiness
which You intend for us.
We ask this through Christ, our Lord.
Amen.

Source:  translation of a small leaflet
from the Basicilica of St. Emmeran,
Regensburg, Germany﻿
Posted by Benedictine Nuns at 12:01 AM