I will make you fishers of men... 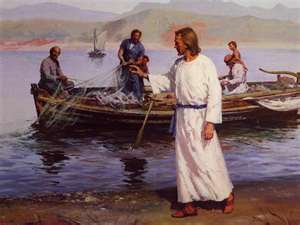 As he passed by the Sea of Galilee, he saw Simon and his brother Andrew casting their nets into the sea; they were fishermen.  Jesus said to them, "Come after me, and I will make you fishers of men."  Then they abandoned their nets and followed him.  He walked along a little farther and saw James, the son of Zebedee, and his brother John.  They too were in a boat mending their nets.  Then he called them.  So they left their father Zebedee in the boat along with the hired men and followed him.  (from Mark 1:14-20)

Can you imagine what it was like for Simon Peter, Andrew, James and John?  Had they been waiting for Jesus to come by?  Searching the horizon for Him while they worked?  Hoping, against hope, that they could at least catch a glimpse of Him?  Can you hear their conversations:  "Did you see Him yet?"  "Do you think He will be on shore when we get there?"  "Do you think He'll let us spend some time with Him today?"  "What do you make of that last story He told?"

Today, let's put ourselves in this Gospel passage and think about how we would react if we were called like Simon Peter, Andrew, James and John.  Would you, do you, have to courage to follow Him as unreservedly as these apostles?
Posted by Benedictine Nuns at 12:01 AM