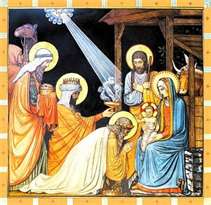 Born a King on Bethlehem's plain,gold I bring to crown him again,King for ever, ceasing neverOver us all to reign.

Frankincense to offer have I:incense owns a Deity nigh;prayer and praising, gladly raising,worship him, God Most High.
Myrrh is mine; its bitter perfumeBreathes a life of gathering gloom;sorrowing, sighing, bleeding, dying,sealed in the stone-cold tomb.

These verses from the traditional hymn﻿ We Three Kings  help give an explanation of the gifts the Christ Child received from these visitors from the East.  We have heard often gold, frankincense and myrrh -- but what's the meaning?  Kingship.  Divinity.  Death.  Three very distinct things that marked who He was and what He would accomplish.

Christ's kingship was not a power struggle that was used to suppress the people He ruled.  His kingship is rather as Lord of our hearts -- a good, kind, merciful king who is concerned and loving.

Christ is the Son of God and Son of Man.  He left the heights of heaven and assumed the flesh of man yet lost nothing of his divinity.

Christ's death was his triumph on the Cross.  His death, bitter, painful and bloody, was willing embraced so that we -- sinners that we are -- could be re-united with Him once again.

What gifts are we being asked to present this Epiphany?  Probably not gold, frankincense and myrrh -- but erhaps there something more we could do each day?  A kind word or smile?  Refraining from a harsh word?  Giving that extra hand when we don't think we can give any more?  Take some time today to think what gift you can give...
Posted by Benedictine Nuns at 12:01 AM

Email ThisBlogThis!Share to TwitterShare to FacebookShare to Pinterest
Labels: Epiphany